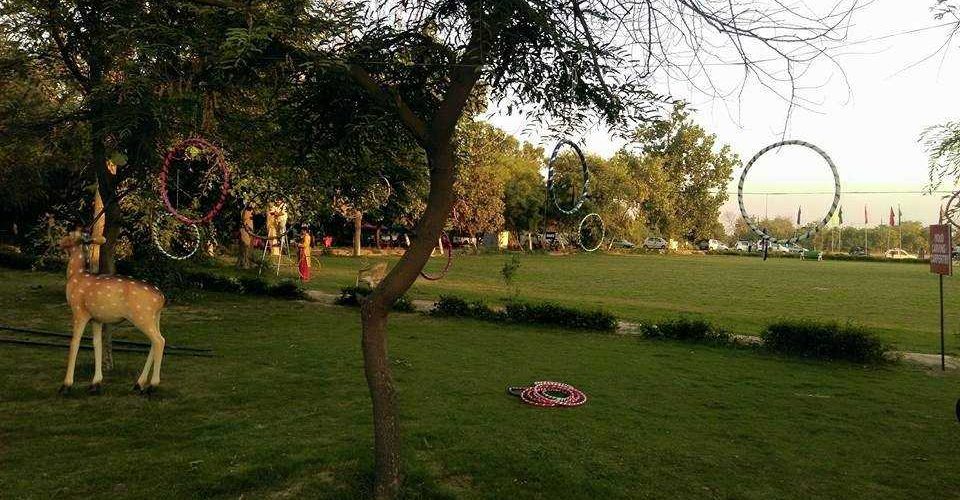 According to the  World Economic Forum, the cities which have more trees are less busy, with lower rates of noise. A fully grown tree can consume up to 150 kg of carbon dioxide annually. According to the Organization for Food and Agriculture, trees in urban areas minimize ozone, sulfur dioxide, and particulate matter, eliminate significant quantities of carbon dioxide from the environment, and emit oxygen.

Metropolises worldwide are thus increasingly creating urban forests. Seoul, Singapore and Bangkok have built green corridors that provide space for nature and wildlife while improving the lives of city dwellers. Such initiatives are imperative, given cities will host 68% of the world’s population by 2050, according to the United Nations.

Many cities in India do have gardens and parks, but not forests. The table below clearly indicates the absence of substantial green spaces in the major Indian cities. Except for Gandhinagar, Chandigarh, and Mumbai, the green cover in the urban spheres are at an alarming figure. Focusing on per capita green space, one will have to even exclude Mumbai from this list.

On the occasion of World Environment Day, the Indian government on 05th June 2020 announced the implementation of the Nagar van scheme to develop 200 Urban Forests across the country in the next five years. The focus is on people’s participation and collaboration between Forest Department, Municipal bodies, NGOs, Corporates and local citizens.

These urban forests will primarily be on the existing forest land in the City or any other vacant land offered by local urban local bodies. The scheme will also allow states to manage urban ecosystems.

The finances for the scheme will be paid for by the CAMPA (Compensatory Afforestation Fund (CAF) Act, 2016) funds.

How to make the plan effective?

In 2016, Prakash Javadekar, India’s Minister for Environment, Forests, and Climate Change had launched the exact same scheme at a commemorative function at the Sanjay Gandhi National Park in Borivali, Mumbai.  But there is no substantial government data available on what goals were achieved on planting “200 city forests” between 2016 and 2020.

The Turahalli forest in Southern Bengaluru is being saved from garbage dumping and vandalism thanks to legal action initiated by the Environmental Support Group, a pan-India advocacy forum.

In fact, the 200 cities identified by the Ministry of Environment, Forest and Climate Change (MoEFCC) need to benchmark the current level of forests in and around the area – in acre terms and in per capita terms – and then ensure that they meet the minimum standards. The ministry should plan to increase aggregate area and per capita area under forests in urban masterplans and land-use plans.

The MoEFCC must mandate that city masterplans and regional plans undergo mandatory strategic environmental assessments. This will help plan cities that conserve and enhance their limited environmental resources and make them more habitable.

The policymakers need to look at environment zoning mandates used in regional plans in India. The Regional Plan for the Delhi National Capital Region mandates a 10% forest area in the NCR and has a zoning category called a Natural Conservation Zone. The latter requires them to be protected and restricts construction in the Aravalli hills, forests, water bodies and riverbeds.

To make the urban forests a reality simply requires implementing the provisions of the Nagarpalika Act, where ward committees can develop schemes to protect forests that are being urbanised and these plans are then integrated into the district/metropolitan development plan and approved as such by the constitutionally empowered.

But the issue is not only with the lack of laws. For example the Karnataka Town and Country Planning Act 1961 suggests the creation of tree parks and such other unstructured wooded spaces, but it “has largely been used ritually, and even violated substantially, by not providing legally defined open and wooded spaces.”

Other role models we have

Maharashtra’s first-ever urban forestry project was developed by TERRE, a non-profit, with Tata Motors under a public-private partnership model as a corporate social responsibility initiative. From a 16-hectare barren strip of land under the forest department encroached on by slums and builders, Warje has been transformed into a thriving oasis of biodiversity. It hosts over 10,000 indigenous plant species, 29 local bird species, 15 butterfly species, 10 reptile species, and three mammal species.

Vanvadi, a large private forest in the Sahyadri foothills, which is around 90-km from Mumbai, is spread over 65 acres. This was formed by a group of 24 nature lovers who in the year1994 contributed and bought this land for ecological conservation and regeneration. Today, in that space there are over 50,000 trees, and rich biodiversity of plants, including 52 edible plant species, over 30 medicinal species, and around 20 timber species. Water harvesting has helped recharge the groundwater here benefiting the neighboring downstream villages.

Shimla hosts a sanctuary of around 1,000 hectares that started off as the Shimla drinking water catchment forest managed by the municipal body in the 1890s.

In Southeast Delhi, the Asola Bhatti Wildlife Sanctuary was remoulded from degraded village common land to reserve forest and then was ratified as a sanctuary. Similarly, Gurgaon’s Aravalli Biodiversity Park was created as a haven for native species in a degraded and mined landscape by a unique partnership between the municipal corporation, civil society, corporations, and residents. It now has hundreds of flowering Aravalli trees and shrubs, attracting almost 200 bird species. In the Green Park region of South Delhi, there is an urban forest curated.

Green Yatra, a group that promotes urban forests, has promoted the idea of a famous sustainable urban forestry model, known as the Miyawaki method.

“Miyawaki forests replicate a tropical rainforest where trees grow in layers, with shorter shade-loving trees in the undergrowth and high-canopy species overhead. In conventional forestry, around 1,000 trees are grown in one acre. We plant 12,000 in the same area under Miyawaki, which creates the benefit of a 100-year-old forest in 10 years,”

Green Yatra have planted 3,000 saplings in a 10,000-square-foot area set aside for forest by the Central Railside Warehouse Company in Jogeshwari, Mumbai. And the idea is to curate two Miywaki forests in the Delhi region.

Another such group that makes use of the Miyawaki method is Afforest. With this, they have created 33 forests so far across 11 cities of India and want to increase the number.

One would also be interested to read about the non-profit Siruthuli from Coimbatore, which has worked extensively in water restoration methods and also on urban forestation. Their initiative known as “Kalam Vanam” has led to the plantation of nearly 80000 forests in the bare and dry land of Anna University in the city.

This green initiative of Siruthuli also inspired another movement in the city of Tiruppur in Tamil Nadu. in July 2015, textile exporters, manufacturers and other industrialists there decided to get together and green their dusty and dry city. They started a movement called Vanathukul Tiruppur, which means Tiruppur within a forest in Tamil.

Unlike urban farming or agro-forestry, urban forestry provides products and services that are largely intangible. How can you charge someone for breathing fresh air? Therefore, a viable revenue model cannot be developed easily.

For local governments stressed for funds, additional revenue may be needed to ensure that urban forests are developed, monitored, and enhanced. While the new avatar of the Nagar Van Yojana will take source from CAMPA fund, there would be still new avenues required. Let us have a look at few such options.

Eco-tourism around urban forests ecosystems is one option that will promote conservation and provide livelihood options. This will enlist the community’s willingness to safeguard these resources and promote sustainable growth.

The entrance fee amount for tourists can be calculated through valuation tools like the Travel Cost Method or the Contingent Valuation Method. The Travel Cost Method assesses the cost of the service in question (tourism and recreation) by considering the amount visitors spend to reach the location. The Contingent Valuation Method simply surveys people’s willingness to pay to enter such a tourist location.

Another example would be of Forest Research Institute (FRI) campus of Dehradun, where fruit vendors collect litchis (Litchi chinensis) during summers. Fruit orchards have been set up in the campus and the administration generates revenue by providing contracts to local fruit-sellers. Similarly local bodies in the cities can also make it a cyclical economy model out of the city forests.

The classical option would be to charge a cess or tax on the users of these services. However, this option would be unlikely to succeed in Indian cities where such taxes are difficult to enforce and recover.

One example PES for urban forests could be employed by communities living close to urban forests and deriving its benefits directly. A payment for this urban forest could be charged as part of the maintenance fee that residents pay to their Residents Welfare Associations (RWAs). RWAs can manage this community-owned Urban Forest Fund for long-term nourishment of the urban forest. Local NGOs can support such initiatives in communities, at least in the beginning.

Another example of PES, which is well established in the world, is carbon trading in voluntary markets.

Many municipalities of the United States are piloting a voluntary carbon market, where the municipality can sell credits to private players.

After the Clean Development Mechanism (CDM) stalled, India has been working with the World Bank to establish its own voluntary carbon market. A component of this carbon market could be around urban forests, enabling private capital to flow into urban green spaces. Developing a carbon market for the unique conditions of an urban forest would require a separate reference level and customized protocols for its maintenance and carbon stock measurement. If developed and adopted, India would be one of the first operational carbon credits around urban forests. India has the capacity for this, considering the successfully implemented PAT scheme, a form of market-based carbon trading.

The highlighted fear with this ambitious scheme is the usage of the conventional urban forestry approach. In this the urban forest ecology and succession is rarely given importance, evidenced by the minuscule number of experimental research on urban forest succession lasting greater than 5 years.

The policymakers forget that forests are complex ecosystems, supporting a wide variety of processes and organisms. Urban forests are no different.

What is a well-rounded urban forest?

When planning an urban forest, 4 important questions need to be addressed:

In addition to these 4 parameters, the primary focus should be on the purpose to design, specifically targeted at deriving one or more ecosystem services from urban forests. The key three steps to it would be, a) Knowing what to plant, b) Understanding the local ecology, and c) Enabling Indicators to drive design. 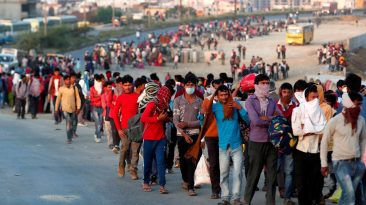 Leaving No One Behind: The Pandemic & Paths to Prosperity in India

The Covid-19 pandemic, which pushed many countries to bring their economies to a grinding halt, has had a deep impact on the Indian economy...